It was Lakshmi who suggested Bangalore to Lepakshi. Even though we had done many trips in the past in a car we never got a chance to go on a long bike ride. Lepakshi was a great option as it is a 300km ride up down and can be covered on a Sunday.

We started at 6 AM and were amused by the traffic on Bangalore roads on a Sunday morning. The weather was too moody for an early morning ride. Once we crossed Hebbal and started cruising through the Bangalore Hyderabad highway, we could see a thin streak of golden ray peeping through the clouds.

By the time we covered 60kms, those dark huge clouds were far behind and a clean blue sky welcomed us. We wanted to take a break. Not because we were tired but to spend some time under a vineyard. Once you cross Devanahalli Fort, vineyards thrive on both sides of the road.

NH44 is one of my favourite highways in the country. The roads and the never-ending cultivations on both sides are beyond beautiful. We managed to explore a Rose and a Yellow Marigold field too on our way. 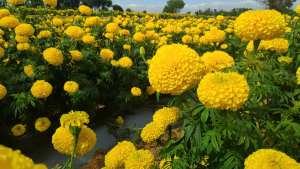 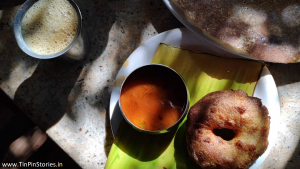 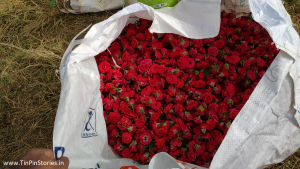 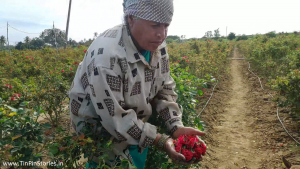 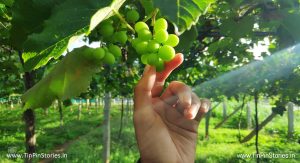 There are many roadside tea shops and eateries on the way. We took a small break for breakfast when we were 45 minutes away from Lepakshi.

Lepakshi is located within the district of Anantapur in Andhra Pradesh. The story behind the name ‘Lepakshi’ goes back to the time of Ramayana. It is said that when Lord Ram on his way to rescue Sita from Lanka finds fallen Jatayu with its wing chopped off by Ravan. The words of Lord Ram “Le Pakshi” (Rise Bird) while helping Jatayu was later adopted as the place name where the incident happened.

The Govt. of Andhra Pradesh requires a special mention for providing good infrastructure throughout the state. The same has been showcased in Lepakshi as well. The roads to this small village are wide and well maintained.

Sri Veerabhadra Swamy temple is roughly 15kms from the highway. Few 100 meters before you reach the temple, there is giant monolithic Nandi (Shiva’s Mount) statue. It is carved out of a single granite block. The Nandi is 15 ft tall and 27 ft long and is largest of its kind in the world.

Parking outside Veerabhadra temple is limited. The temple authorities charge ₹20 for parking.

The temple is set to have built-in 1533 AD under the reign of Vijayanagara Emperor Achuta Deva Raya. His two Governers Virupanna Nayaka and Viranna Nayaka (both brothers) were in charge of the construction. 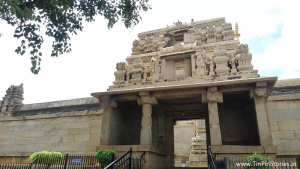 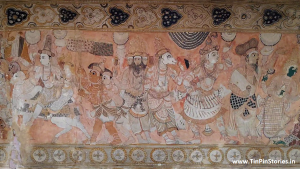 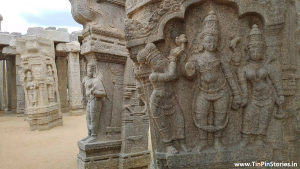 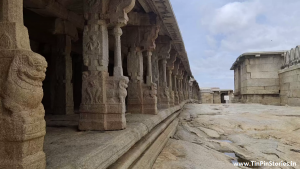 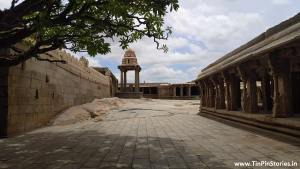 The temple is laid out in three different sections; Mukha Mantapa, Ardha Mantapa and Gabhagriha. Each corner reminds you of the Vijayanagara architectural style. The mural paintings on the ceilings are beautiful. They still look young in vibrant colours. These Vijayanagara pictorial arts tell us stories of Mahabharata and Ramayana.

To the eastern side of the compound, you find another monolithic sculpture of a huge Linga on a coiled serpent. Many heads of the serpent shades the Linga. The earlier mentioned Nandi which is roughly 200 meters away faces this Linga.

To the west of the compound stands an incomplete Kalyana Mantapa. There is a tale behind this incomplete structure too. The construction of the temple happened when Emperor Achuta Devarayar was on a tour. When he returned, he came to know about the humongous budget used for the construction. He asked his two governors to drop the project. None of Achutaraya’s successors was interested in completing the Kalyana Mantapa. 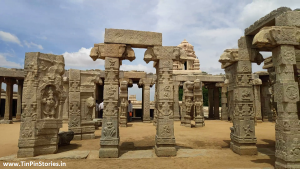 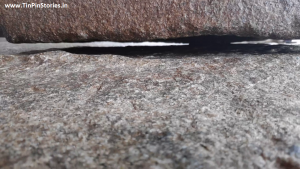 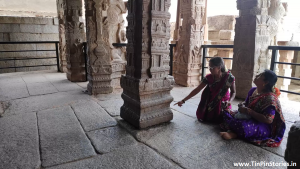 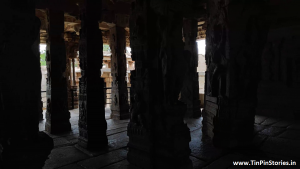 Natya Mantapa has 60 pillars. Each sculptured with a different avatar of Shiva, characters from Vedas and epics. The famous hanging pillar of Lepakshi stays grounded in this Mantapa. Majority of the blogs, articles and videos on the internet says the pillar is hanging/levitating. But the fact is that the pillar was displaced by a curious British architect a few decades back. He wanted to understand if all the 60 pillars carrying giant granite ceiling blocks had a role to play. Once the experiment was over the pillar came to a slanting position with one small part touching the ground. This gave a levitating illusion.

There are two beautiful trees inside the compound. You can sit under the trees for a few minutes and enjoy the architecture.

It took us around 45mins to cover the entire temple.

There are no locker facilities provided by the temple authorities. So please plan how to take care of your belongings if you are travelling by a motorbike.

When you meet the locals, do smile at them. They are warm, friendly and down to earth, as their village.